Super Safari online video slots machine is a 5-reel, 25 payline slot from NextGen Gaming. The reel symbols are predominantly safari animals like lion, elephant, hippo, rhino, alligator, hyena, giraffe and monkey. These reel symbols are crafted in a cartoon fashion style, but the caricatures have attempted to capture the character of these impressive beasts. There are, additionally, some special symbols like the warden’s car and the pair of binoculars.

Super Safari offers 25 paylines to establish winning combinations upon. Players have the option of playing with only one payline activated, but it is always better to play with all paylines active. The bet per line can be adjusted from 0.01 to 2.00 in the given coin sizes. The maximum total bet per spin works out to 50 coins. This range will work well for most low rollers. The line payouts are in proportion to the size of the animals. The elephant pays the most at 5000 times the line bet for five elephants on an active payline. The rhino comes next with 2000 times the line bet. Both these animals start paying when two appear aligned from left to right.

In Super Safari video slots, the lion icon is the Wild symbol. It appears only on reels 2, 3 and 4 and does not award line payouts. However, it does contain a bonus feature in that when three lions appear on the reels, the player is rewarded with three re-spins, and with all payouts tripled. One of the reels also becomes an expanded wild.

The game warden’s jeep is the Scatter symbol in Super Safari slots. Players are immediately awarded scatter payouts when two or more of these appear anywhere on the reels. Unlike the line payouts, these are multiplied by the total bet. Three or more scattered jeeps trigger the Off Road Safari feature.

When this feature is activated, players immediately win 10 free spins with doubled payouts. Every time the binoculars land on reel 3, gamblers get up to three Super Spins, in which payouts are multiplied five times. Both the free spins and the Super Spins can be retriggered.

In Super Safari video slot, when three hippo symbols appear scattered on the reels, players get to pick one of them to be awarded a bonus up to 150 times the triggering bet. The hippo may request another pick, or even award the player all three bonuses. If the feature is triggered during the free spins, the rewards could be as high as a 300x multiplier, and if triggered during the Super Spins, players can win up to 750x. 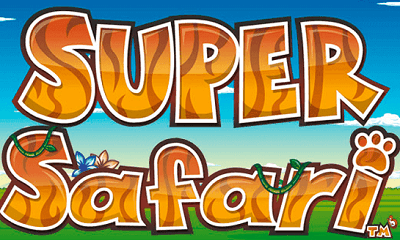 After every payout players can activate the gamble feature if wanted, by clicking on the playing card suits button below the reels. Guessing the colour of the next card could double the payout. Or players can opt to guess the suit of the next card and quadruple the payout. There is a catch attached, in that an incorrect guess forfeits the winnings.

Super Safari is an entertaining African safari-themed slot machine, and NextGen Gaming has provided some excellent graphics, functionality and bonuses.