Mad Mad Monkey is a twenty five payline, five reel video slot available on most mobile devices. This is a fun low to medium variance slot which means that the wins won’t be huge, but hitting the special features will be consistent. The slot offers 350 possible line and line bet combinations, which make this a great slot for all users and budgets.

The player can choose to play between one and fifty lines per spin, and stake from 0.02 and five coins per line, which gives you a minimum bet of 0.02 and a maximum bet of 250 coins a spin. This casino slot is better played on a larger screen like a tablet, as the smaller screen require a bit of scrolling to see the whole game, which detracts from the overall experience.

Our reels are set in a very green and bright jungle. The premise behind the slot is that our monkey’s friends are driving him a bit mad by hiding his favourite fruits. Why they are still his friends then we will never know. The graphics are sharp and the symbols nicely designed. The monkey himself is a little creepy, but he is supposed to be mad, which is maybe why he looks a bit like an escaped mental patient. Look out for him as he pops his head out from the side of the reels from time to time. Al symbols animate when forming part of a winning combination. 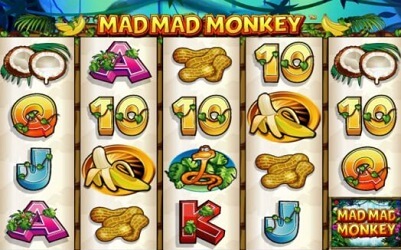 The symbols in the game are from the Jungle, namely the Monkey’s missing fruit and his friends who have hidden them. The base symbols are from a deck of cards, and all letters and numbers are done up to look like vines. These are worth up to 300 coins for finding five matching symbols on one of your active paylines. Next up is the monkeys missing food, starting with the monkey nuts, also up to 300 coins for five of them. Coconuts will award you with up to 400 coins, and bananas being the monkeys favourite with up to 1000 coins. His friends Parrot and Snake will award you with 400 and 1000 coins respectively for five of each in a row.

The business end of the game involves two special symbols. The first is the Wild Monkey symbol that serves two purposes. Firstly, it has the power to substitute for all regular symbols, and when it forms part of a winning line, all prizes are doubled. These wilds can also become stacked, which means that they will take the place of multiple symbols across the reels. This of course greatly increases your chances of winning combinations.

Scattered Mad Mad Monkey symbols can appear across the reels, and finding three to five of them gives you the opportunity of multiplying your bet up to 400 times. Three or more Mad Mad Monkeys will also trigger the free spins bonus round, where you will be given ten free spins. During this round the banana symbol becomes stacked wild and all prizes will be tripled.