We each and every single one of us have a world of “tells” about us. “Tells” are basically those quirks and habits that reveal more about our emotions, experience of the current moment, mood, and even whether we consider ourselves to be winning or losing at any given time, than what we probably would like others to know.

All of this make accurately reading tells a crucial skill every Poker player should focus on fine-tuning and mastering as far as possible. By the same token, becoming expert at hiding tells or even faking “tells” at strategic points during a game, can be every bit as valuable as accurately reading the tells of others.

These are just some of the more common Poker tells to look out for.

The Thing about Stance

Any player rectifying or re-aligning his stance (position, physical attitude and posture) while playing has a dead-solid hand. The beauty of this is that most players are completely unaware of the fact that this is happening, thereby giving away their leeway to everyone aware of what to look for.

This one has got to be one of our favourite Poker tells. A tell to look out for whenever a player’s hand has been managed, a change in talk-related behavior is nearly always a sure sign of victory being afoot.

For example: if a player has been quiet right from the start of a game or series of hands, and suddenly, almost out of the blue, becomes a chatty Cathy or even just more verbal (talkative) than usual, expect from that player only the best of winning hands.

Its however also important to remember that a change of behaviour in the opposite direction, i.e. a talkative player suddenly gone quiet, doesn’t necessarily mean to indicate a bad hand. Quite the contrary, in fact. Since we all differ in how we deal with what we perceive to be “good things coming our way”, a player gone suddenly quiet may very well be sporting a solid hand too. It’s only that the reaction is different due to primal differences in human personalities. The gist of it then: be mindful of any sudden changes in behaviour. 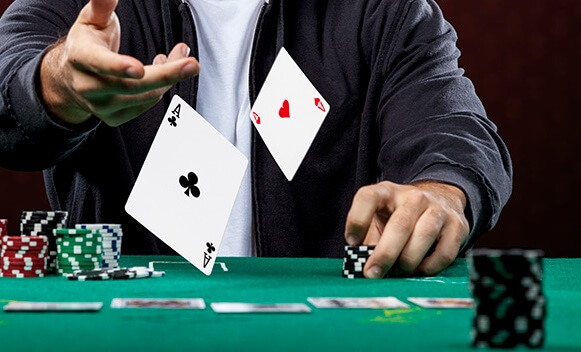 By classifying “voice” as a tell, we mean something entirely different to talkative vs. non-talkative. This has much more to do with a players tone or an actual change in frequency – strange as though this may sound.

Players may have perfected the art of covering their tells by wearing coats capable of weathering any arctic storm in the middle of summer, or by wearing over-sized shades, but most players aren’t even aware of not being able to control “how” they talk.

Not only should the teller of tells take note of how much a rival is talking, or how little, but also of any sign of shakiness or hesitance present in that player’s voice. A sudden change in tone or frequency will often mean that a bad hand has been dealt.