Las Vegas took off in the 1960’s, but before then, Reno had already established a gambling community. Reno was found in the 1800’s, but by 1860, James Nye – the then Governor – took a stand against gambling and it was banned. For the next 70 years the ban became less serious and certain forms of gambling was allowed. In 1930 the ban was lifted and Reno had a booming gambling community, some 30 years before Vegas managed to do so.

Today Reno has over 20, booming casinos. Together these house over 16 000 slot machines. This figure gives an average of 1 slot machine per every 14 people that live in Reno. For a very long time, Reno was the primary gambling destination in Nevada. Some say that it has the best slots games in the entire world.

Back in 1988 the publication ‘Casino Player’ invented the notion of loose slots. They wanted to arm players with information on where to go to find the best, biggest and easiest paying slot machines. The first ever ‘Loosest Slots’ award was given in 1994. Reno casinos have won this award more than six times, proving that it does have the best slot machines in the world.

In 2014, five hundred and forty checkers players gathered in Reno – most of them at the Peppermill Resort Spa Casino – to set a Guinness World Record for most checkers players to play simultaneously. It was the first time that the record had been attempted and Guinness World Record adjudicator, Philip Robertson, said that is was an honour to bestow this record and add it to their collection of world records. 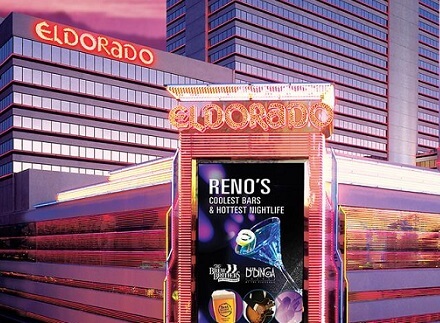 The Eldorado Resorts Inc has since June 2019, been the new owners of the Caesars Entertainment Corp, which has since then become the largest owner of casinos in the entire United States of America, due to the buy out. The Caesars name has been kept and Eldorado head quarters is still in the ‘Biggest Little City in the World’, making Reno the new Casino capitol of the United States of America. This is rather impressive if you think that 40 million people visit Vegas annually while only 4 million go to Reno annually.

Reno is home to the third best child friendly Casino Resort in the United States of America. The Circus Circus Casino offers many child friendly activities for the entire family, ranging from daily live circus acts to large carnival games where children stand a chance to win large stuffed animals.

Besides for gambling activities, Reno is host to many notable fun facts, like hosting the largest climbing wall and the best chapel tavern to drink rum. Suffice to say, there are many amazing fun facts about Reno that makes this a number one holiday destination for the entire family. While you are visiting, don’t forget to get a grilled cheese from the Gourmet Grilled Cheese Truck, as it is noted as the best grilled cheese that you will ever find.